(Lansing)—As President Obama and Governor Romney prepare for their first debate this evening, Michigan Catholic Conference is releasing polling data that indicates overwhelming support for religious organizations to provide public services in accordance with their faith and without government interference. According to 600 likely Michigan voters, 80 percent of respondents answered in the affirmative to the following question:

“Do you believe religious organizations in the U.S. should or should not have the freedom to provide educational and charitable assistance to the general public that is in accordance with their own religious beliefs and teachings, without government interference?”

“Michigan residents are clearly stating that faith-based organizations have a right to adhere to their religious tradition when serving the public,” said Michigan Catholic Conference President and C.E.O. Paul Long. “Many of these institutions, including those that are Catholic, have been providing charitable and educational services for hundreds of years free from government interference. Regrettable, this is a precarious time for religious liberty.”

Religious liberty has been a matter of grave public concern this year after the U.S. Department of Health and Human Services in February failed to exempt religious organizations from an objectionable services mandate. The Administration’s refusal to protect institutions that provide public services, such as schools, hospitals and charitable organizations, has prompted dozens of Catholic institutions nationally, including the Michigan Catholic Conference [Link no longer available —Ed.], to seek legal protection from a mandate to include abortion-inducing drugs, sterilization and artificial contraception in their employee health benefit plans. Employers that fail to adhere to the HHS mandate have been given the choice either to violate their conscience or pay significant fines.

Likely voters across the board support the notion of religious liberty in the provision of public services as Democrats and Republicans, men and women, young and old, pro-life and pro-abortion rights advocates overwhelmingly answered the above question in the affirmative. For example, 70 percent of those who voted for President Obama in 2008, 77 percent of passive pro-choice persons, and 64 percent of self-identified liberals support faith-based organizations providing public services without government intervention. Additional cross-tabs are provided below.

This survey was conducted by MRG and commissioned by the Michigan Catholic Conference. It sampled 600 likely voters (34 percent Democrat, 34 percent Independent and 30 percent Republican) and has a statistical margin of error of +/- 4 percent. The survey was conducted September 10-15, 2012 with all live interviews by phone; 20 percent by cell phone. 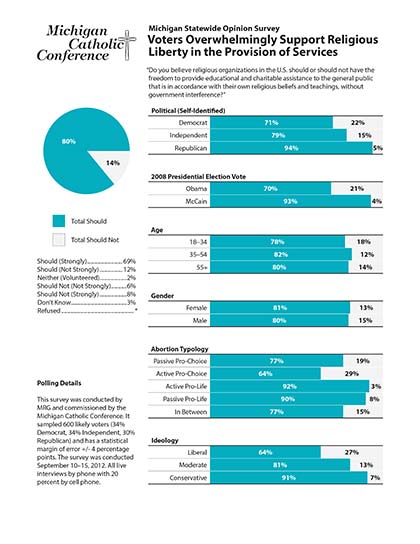 Michigan Catholic Conference is the official public policy voice of the Catholic Church in this state.