Throughout the past few months, lawmakers have been discussing whether or not to extend Medicaid eligibility to individuals earning up to 133% of the Federal Poverty Level. The expansion would increase access to healthcare for this population and decrease the number of uninsured in Michigan by 46%, or 450,000 individuals. The bill passed the House Michigan Competitiveness Committee earlier this week, and yesterday, the House voted 76–31 to approve this important public policy for Michigan residents. MCC applauds the House for its bipartisan support of this bill, which would:

After the House’s approval, HB 4714 is now expected to head to the Senate Government Operations Committee. MCC will continue to encourage lawmakers to make reforms before they leave for summer break, as this legislation promotes the dignity of the human person and is needed for many Michigan residents.

A statewide campaign is now underway to protect Michigan taxpayers from subsidizing abortion coverage on the federal health care exchange. If the campaign is successful, Michigan will join twenty-one other states that have already passed similar prohibitions. The citizen petition drive, operating under the committee name No Taxes for Abortion Insurance and backed by Right to Life of Michigan, would allow abortion insurance legislation to be put before the Michigan Legislature for a vote within 40 calendar days, provided that the petitions gather at least 258,088 valid signatures within 180 days. If a simple majority vote of both chambers agrees to the measure, it will become law. If not, the measure will go to the voters for their consideration.

Training sessions for the petition gathering process have already begun and many have been conducted in Catholic parishes around the state. It is vital that Michigan Catholics take an active role to speak up for the dignity of human life and send a message that abortion is not health care. This week, Michigan Catholic Conference sent out information to each parish in the state on the petition drive, including a letter from MCC’s President and CEO encouraging participation in the effort, sample bulletin announcements [Link no longer available —Ed.], a frequently asked question sheet [Link no longer available —Ed.], and a petition material order form [Link no longer available —Ed.]. Since this petition effort is an initiative proposal, parishes are able to and should take an active role in distributing materials and speaking on the subject. MCC urges pastors and parish staff to consider using the materials and also to encourage parishioners to become involved. Parishioners are advised to contact their parish office to promote active support of the petition. Stay tuned for further updates in the coming weeks.

After several months of discussion on indigent defense reform, which would create a commission to establish and implement minimum standards throughout the state, both the Senate and the House approved their respective chamber’s legislation yesterday. In the Senate, members joined together to support SBs 300 and 301 on a 32–6 vote. Later in the evening, the House voted 101–6 in support of identical bills, HBs 4529 and 4530. Final legislative approval is expected next week.

Last month, the Senate passed Senate Bill 284, which would help provide heating assistance to eligible low-income families and begin these families on a path to energy self-sufficiency. This week, a slightly modified version of the legislation passed the House Energy and Technology Committee and then was approved by the full House yesterday. Michigan Catholic Conference supports SB 284, which now returns to the Senate for final approval. As modified the bill would:

In last week’s Lansing Update, Michigan Catholic Conference outlined the funding granted by the Legislature to MCC-supported programs in the 2013–2014 state budget. This week Governor Snyder signed the budget into law, retaining these important programs for the state of Michigan. Listed below are several examples:

For a full list of MCC-supported programs in the final budget from last week’s Lansing Update, click here.

Michigan Catholic Conference testified in support of Senate Bill 120 earlier this week, introduced by Senator Patrick Colbeck (R-Canton). This bill would prohibit school boards and officials from censoring historical instruction in public schools based on religious references in original source documents, such as speeches or writings (i.e. taking out the reference to “our Creator” in the Declaration of Independence). This legislation is important to ensure that students accurately learn the history of America and of Michigan, including the role religion has played throughout our nation's history. 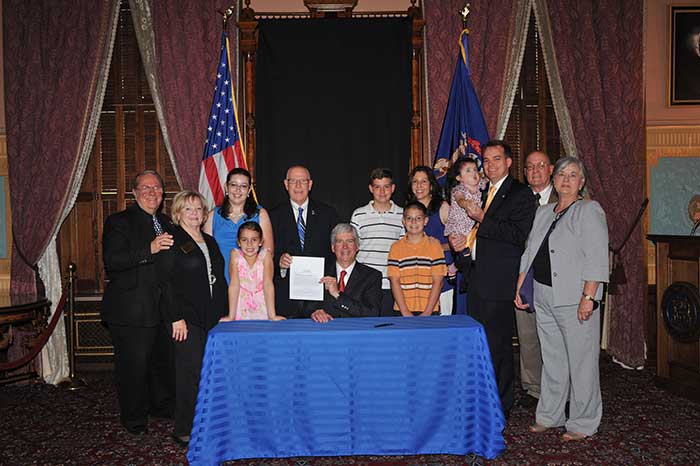 On Tuesday, Governor Rick Snyder signed the Medical Good Faith Provisions Act (Senate Bill 165), which will require health facilities to make their policies involving life-sustaining or nonbeneficial treatment available to their patients in writing, upon request. Michigan Catholic Conference supported the bill, which provides prospective patients and families with the knowledge necessary to choose health facilities that work best for their health care needs. The legislation has now been enacted as Public Act 57 of 2013.