On Wednesday, January 22, the Michigan House of Representatives approved three human trafficking bills, each by a bipartisan vote of 109-1. HBs 4209 and 4210 would make it a felony to solicit a sixteen or seventeen year old to commit prostitution, and HB 5158 would create a permanent Human Trafficking Commission under the Office of the Attorney General to evaluate and address the state’s responses to human trafficking. Each of the bills will now be sent to the Senate for its consideration.

The House Criminal Justice Committee also took testimony on House Bill 5025, a measure which allows human trafficking victims to have their criminal records expunged for an offense committed while being trafficked, such as prostitution. Similar legislation has been discussed in the Senate. Michigan Catholic Conference supports the legislation, which now awaits action on the House floor, and looks forward to continued efforts to treat victims as victims, not as criminals. Further legislation has been introduced in both chambers and awaits review from MCC staff.

On January 9, House Bills 5216-5218 were introduced, which would allow the Department of Corrections to award a “certificate of employability” to suitable parole candidates to help them find employment upon their release. The certificate would be awarded after consideration of several factors, including the criminal history of the prisoner, job skills of the applicant, and the institutional history of the program, such as record of misconduct and completion of counseling or a GED. This week, the bill sponsors gave a brief overview of each of the measures to the House Commerce Committee. Michigan Catholic Conference indicated its support for the legislation, which will help parolees to overcome roadblocks to obtain meaningful employment and to re-establish themselves as members of the community. The committee is expected to take further testimony in the coming weeks.

Despite Cold, March for Life Brings Thousands to DC

Groups from all over the country and the state traveled to Washington DC this week for the March for Life on January 22 (see the picture below of several participants from the Diocese of Gaylord). The theme of the march focused on promoting adoption as an alternative to abortion. Organizers made a concerted effort to draw more participants into the event through social media, encouraging individuals to share their reasons for standing up for the pro-life movement on Facebook and Twitter. Pope Francis even joined in on the occasion, tweeting “I join the March for Life in Washington with my prayers. May God help us respect all life, especially the most vulnerable.” In honor of the 41st anniversary of Roe v. Wade, Michigan Catholic Conference President and CEO gave an interview [Link no longer available —Ed.] on Michigan’s Big Show with Michael Patrick Shiels about the current state of human life policies in Michigan. 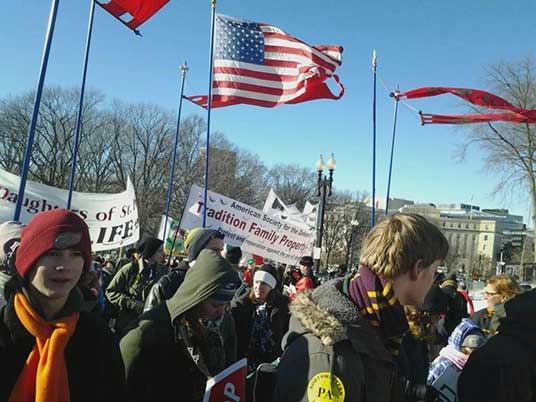 With the celebration on January 24 of the Memorial of Saint Francis de Sales, patron saint of communicators, Pope Francis released his message for World Communications Day. This year, the day will be celebrated on June 1, 2014. His message is titled “Communication at the Service of an Authentic Culture of Encounter,” and it speaks to the importance of using new media to reach out to those in need of the message, and also the importance of growing connections with others through media into true encounters.

“How can we be ‘neighborly’ in our use of the communications media and in the new environment created by digital technology? I find an answer in the parable of the Good Samaritan, which is also a parable about communication. Those who communicate, in effect, become neighbors. The Good Samaritan not only draws nearer to the man he finds half dead on the side of the road; he takes responsibility for him. Jesus shifts our understanding: it is not just about seeing the other as someone like myself, but of the ability to make myself like the other. Communication is really about realizing that we are all human beings, children of God. I like seeing this power of communication as ‘neighborliness.’ …It is not enough to be passersby on the digital highways, simply ‘connected’; connections need to grow into true encounters. We cannot live apart, closed in on ourselves. We need to love and to be loved. We need tenderness.”

If this email was forwarded to you, please click here to join the Catholic Advocacy Network, which will enable you to receive regular electronic updates and alerts.