On February 5, 2014, Governor Rick Snyder presented his state budget recommendations to the Michigan Legislature for the 2015 budget year (October 2014 to September 2015), which contains $52 billion in total funding. Michigan Catholic Conference staff particularly monitors the budget bills for the Department of Community Health (DCH) and the Department of Human Services (DHS), as well as several education-related initiatives. Below are a few budget areas of interest to the Conference, and in parentheses the recommended funding level by the governor’s proposal:

Last budget cycle, MCC advocated for funding for the Real Alternatives program, which assists women in crisis pregnancy situations and offers alternatives to abortion. This year, MCC was pleased to see the continued funding of the program in the governor’s budget recommendations at $700,000. Currently, the program reimburses for counseling, services, and educational programs at crisis pregnancy centers, and MCC staff hopes to see an increase in funding in order to expand the program.

Now that Governor Snyder has proposed his budget recommendations, both the House and Senate will take testimony and consider other legislative budget proposals. MCC will continue to monitor the process and weigh in when necessary.

The State of Michigan is looking at a surplus in tax revenue this year, which has fostered debate about the best way to allocate the extra funding to benefit the citizens of Michigan. During his budget recommendations, Governor Snyder proposed $102.7 million in tax relief by expanding the Homestead Property Tax Credit. The credit is currently available to homeowners and renters who earn up to $50,000, and an enhanced amount is available for low income seniors and individuals who are disabled. The proposal would extend the credit to those who earn up to $60,000. Other proposals from elected officials have included increased funding for roads and the state’s education budget. Michigan lawmakers are considering these and several other proposals to determine where the surplus revenue should be allocated. MCC will continue to monitor the development of these proposals and provide further updates when available.

As mentioned in past Lansing Updates, the mandatory sentencing of juveniles to life without the possibility of parole was found unconstitutional in a 2012 U.S. Supreme Court case, Miller v. Alabama. In the ruling, the Court did not clarify whether its decision applied retroactively to past cases. In January 2013, U.S. District Court Judge John O’Meara called for Michigan to come up with a plan to bring the state in line with the Supreme Court’s decision by January 31, 2014. Three cases await action from the Michigan Supreme Court regarding the juvenile life without parole sentence, specifically if those sentenced to life under the age of eighteen without parole constitutes cruel or unusual punishment in all cases and whether or not the Miller decision should apply retroactively.

On February 12, the Michigan Senate approved legislation related to the mandatory sentencing of juveniles to life without parole. The Michigan House has already passed the legislation, House Bills 4808 and Senate Bill 319, which would eliminate Michigan’s mandatory sentence for juveniles to life without parole for serious crimes in future cases. The legislation also includes a line that should the Michigan or U.S. Supreme Court issue a final ruling that the Miller v. Alabama case be applied retroactively, juvenile life offenders could be resentenced to either life without parole or a term of years with parole eligibility. The bills will now be sent to Governor Snyder for his signature.

Michigan Catholic Conference is hopeful that the issue of retroactivity will be addressed through the courts and will keep Catholic Advocacy Network members apprised of further developments. To learn more about the Church’s position on juvenile life without parole, click here to read a recent press release from the U.S. Conference of Catholic Bishops on the topic.

Michigan Catholic Conference also indicated its support for several bills that were considered in the House Criminal Justice Committee this week, House Bills 5234–5236, which would make technical changes to update the penalties and clarify existing sections of the human trafficking law for consistency. To learn more about the signs of human trafficking and the work of the Church on this topic, read MCC’s February FOCUS. 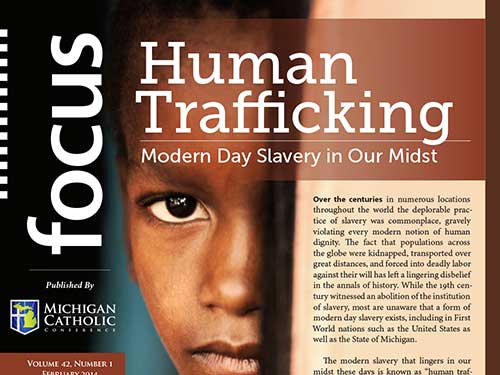 During February 7–14, the United States marked the celebration of National Marriage Week, as well as World Marriage Day on Sunday, February 9. The chairman of the U.S. Conference of Catholic Bishops (USCCB) Committee on Laity, Marriage, and Family Life and Youth called the week an opportunity “to celebrate the gift and blessing of marriage and to affirm and support engaged couples.” For more resources on the promotion, strengthening, and defending of the gift of marriage, click here.

Additionally, on today’s celebration of the Feast of St. Valentine, Pope Francis met with ten thousand engaged couples from all over the world in St. Peter’s Square. He encouraged these couples to consider the vocation of marriage and make a serious commitment to work through problems together and love one another.

MCC Appreciative of Action During CSMG

Thanks to all who sent messages to Congress last week during the Catholic Social Ministry Gathering in Washington, D.C. MCC staff was pleased to have the opportunity to speak with members of Michigan’s congressional delegation in support of comprehensive immigration reform, criminal justice reform, and the federal No Taxpayer Funding for Abortion Act (H.R. 7, S. 946), which would close loopholes in current law to continue the federal government’s policy against federal abortion funding. It is important that Michigan’s federal officials hear from Catholics across the state, and the nearly 1,000 messages that were sent helped bolster the efforts of Catholics throughout the country.

For more information regarding Michigan Catholic Conference’s experience at the Social Ministry Gathering and how it relates to the current budget process, read MCC’s latest The Word from Lansing.