On Wednesday, March 12, the House Michigan Competitiveness Committee took testimony on two resolutions, HRs 315 and 316, regarding the topic of immigration. The measures, sponsored by Representative Klint Kesto (R-Commerce Township) and Representative Harvey Santana (D-Detroit), urge the president and U.S. Congress to increase the number of employment-based visas available for highly skilled advanced degree professionals to come to Detroit. Additionally, they would encourage approval of the state’s application for a regional center to expedite visas and work permits for immigrants who will create jobs and invest in Michigan, which is in line with the governor’s proposal to create an Office for New Americans. Following his proposal in January, Michigan Catholic Conference issued a statement calling for greater attention to the issue of immigration at both the state and federal level. Michigan Catholic Conference indicated its support for the resolutions, which encourage the facilitation of legal opportunities for immigrants to come into the state.

Two of last year’s priority advocacy issues, Medicaid expansion and the Abortion Opt-Out Act, are set to officially go into effect this week. The Healthy Michigan law, also known as Medicaid expansion, provides health care access to those earning up to 133 percent of the federal poverty level. The Abortion Opt-Out Act, initiated through a petition drive by No Taxes for Abortion Insurance, successfully passed the Michigan Legislature in December due to the hard work and signature gathering efforts of churches and pro-life individuals. The Act prohibits taxpayer dollars from contributing to elective abortions. Michigan Catholic Conference is pleased to see both of these important measures take effect in this state.

Michigan Catholic Conference supported five bills that passed the House Criminal Justice Committee earlier this week on the topic of human trafficking. HBs 5234-5236, 5239 and 5241 were approved by the committee to:

Each of these bills now await further action from the full Michigan House of Representatives.

Most Reverend Allen Vigneron, archbishop of Detroit and chairman of the Michigan Catholic Conference Board of Directors, gave the invocation to begin the day’s session in the Michigan House of Representatives on Wednesday, March 12. During this prayer, he asked for God’s blessing on the Michigan Legislature as they make challenging decisions for the people of the State of Michigan, and he asked for the consideration of the common good and respect for religious liberty during the policy process. This is the second time Archbishop Vigneron has offered an opening invocation before the Michigan Legislature; last year the archbishop offered a prayer prior to the governor’s State of the State Address. 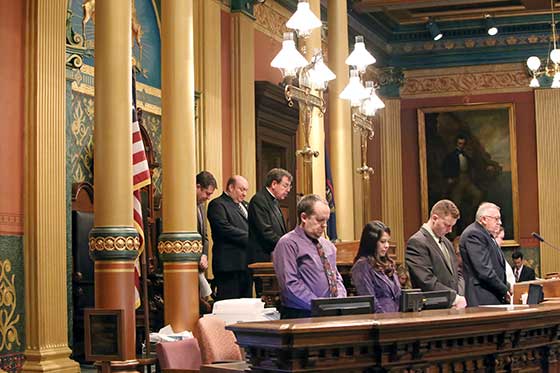 According to the closing arguments last week in the Michigan marriage trial, DeBoer v. Snyder, U.S. District Court Judge Bernard Friedman will likely issue a decision in the case before the end of next week. In his decision, the judge will address the constitutionality of the 2004 marriage amendment that defines marriage between one man and one woman. Michigan Catholic Conference will release a statement once a decision is finalized and distribute it immediately to members of the Catholic Advocacy Network. Stay tuned for this important update.