This week, the House and Senate passed their respective budgets for Fiscal Year 2015 (October 2014–September 2015), which will now be sent to conference committees. Conference committees are made up of three members of each chamber, and they work to address the differences between the House and Senate budget bills and produce final versions. Outlined below are several MCC-priority measures included in the budget thus far:

On Thursday, May 8, individuals from around the state participated in the second annual Human Trafficking Legislative Day, sponsored by Senator Judy Emmons (R-Sheridan). The event brought further attention to the issue of modern human slavery and legislative efforts that are currently taking place in Michigan. The chaplain from Lansing Catholic High School, Fr. Gordon Reigle, helped to lead prayer with other interfaith leaders and individuals at a vigil that ended the day. 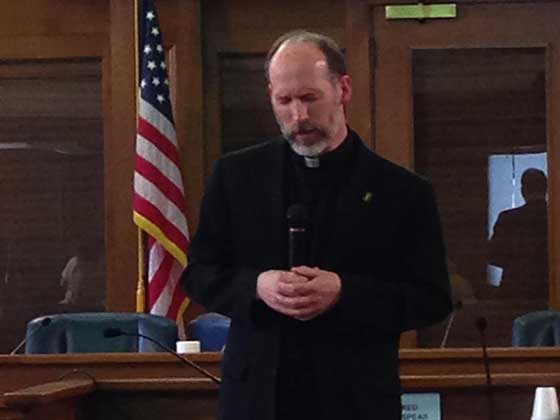 Several important human trafficking bills were also considered this week in both chambers. On Wednesday, May 7, the House Criminal Justice Committee took testimony on Senate Bill 597, sponsored by Rebekah Warren (D-Ann Arbor), which requires medical professionals to receive training and education regarding human trafficking. MCC supported the bill, but no vote has yet been taken. Additionally, MCC supported HBs 4867, 4021, 5231, and 5232, sponsored by Representatives Tom Leonard (R-Lansing), George Darany (D-Dearborn), Joseph Graves (R-Argentine Township), and Nancy Jenkins (R-Clayton), in the Senate Families, Seniors and Human Services Committee. These measures expand the definition of kidnapping and update prostitution statutes to bring them into line with the human trafficking legislation revisions.

Back in March, U.S. District Court Judge Bernard Friedman regrettably struck down Michigan’s 2004 voter-approved constitutional amendment defining marriage as the union of one man and one woman. Michigan Attorney General Bill Schuette appealed the decision to the Sixth Circuit Court of Appeals in Cincinnati, which issued a stay of the decision to put the marriage amendment back into effect during the appeals process. This week, Attorney General Schuette filed an official state brief [Link no longer available —Ed.] arguing that the U.S. District Court judge’s decision should be reversed by the Court of Appeals. The plaintiffs have until June 9 to respond. The Michigan Catholics bishops remain committed to upholding the truth about marriage and have spoken out about the need for continued support of marriage following the March decision.

On Wednesday, May 7, the House Committee on Families, Children, and Seniors heard testimony on House Bills 5508, 5509, 5511, 5512, which address new methods for the state to collect child support payments that are past due. The bills would allow the state to intercept gambling winnings from private, nontribal casinos, withhold past due child support from any payment received by a plaintiff or claimant against the state, and to deny or terminate Family Independence Program benefits. The Committee also discussed HB 5472, which would allow the court to approve a plan to address the reasons an individual is having problems paying child support, such as long term unemployment, substance abuse, or a medical condition. Michigan Catholic Conference will continue to monitor these bills, which are part of a larger child support reform package.

The Senate Regulatory Reform Committee approved House Bill 4528 on Thursday, May 8, which removes the requirement that "immigration clerical assistants" must register with the state. Immigration clerical assistants provide services to individuals regarding the preparation of immigration documents. MCC worked with the bill sponsor, Klint Kesto, (R-Commerce Township), to maintain the prohibition against fraudulent activities and to increase the damages awarded to those individuals harmed by willful violations of the act. The bill, which passed unanimously in the House, will now await further consideration from the full Senate.

MCC’s latest FOCUS publication, which is distributed to parishes, schools, and individuals throughout the state, discusses the issue of juvenile life without parole in Michigan, as well as the Church’s perspective on the sentence and restorative justice. To read this publication, click here.