On Wednesday, January 14th, members of the 98th Michigan Legislature took the Oath of Office at the State Capitol in Lansing. Michigan Supreme Court Chief Justice Robert Young Jr. administered the Oath to all 148 members of the Senate and House during separate ceremonies in both chambers. After the swearing in, lawmakers chose their leadership for the 2015–2016 session. The Michigan House of Representatives elected Representative Kevin Cotter (R-Mt. Pleasant) as the new Speaker of the House and re-elected Representative Tim Greimel (D-Auburn Hills) as the House Minority Leader. The Michigan Senate elected Senator Arlan Meekhof (R-West Olive) as the Senate Majority Leader and Senator Jim Ananich (D-Flint) as the Senate Minority Leader. 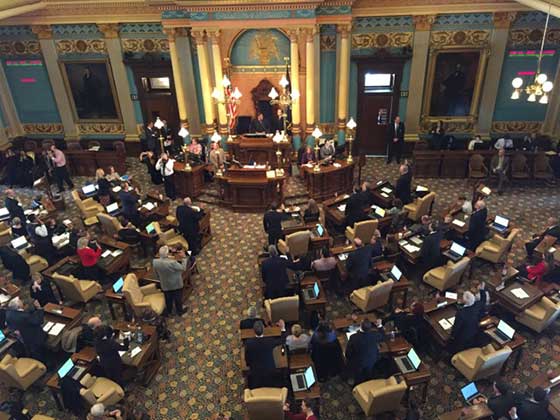 Legislative committee assignments were also announced this week for both the Michigan House and Senate. To see these assignments, click on the links below:

U.S. Supreme Court to Consider Marriage Cases from Michigan and Three Other States

The U.S. Supreme Court announced on Friday that it would hear cases this year from the Court of Appeals for the Sixth Circuit addressing state policies that define marriage as between one man and one woman, including the 2004 voter-approved Michigan Marriage Amendment. The other cases originated in Ohio, Kentucky, and Tennessee. Michigan Catholic Conference issued the following statement after the announcement:

“This is a significant moment for the nation’s highest court to move toward settling one of the most important societal questions in recent history. Marriage is the foundation for a just society; it is the only institution that unites children with their mother and father together. For the sake of the common good, and to secure the fundamental building block for all of humanity, we pray the Supreme Court will inevitably find traditional marriage amendments constitutional both in Michigan and throughout the nation.”

Briefs will be due in February and April, which will then be followed by oral arguments. More information will be provided as the four cases move forward.

On Friday, January 16, the Michigan Department of Treasury met with the House and Senate Fiscal Agencies to determine the status of revenue in the state. They estimate the overall General Fund for the current fiscal year is down by $324.6 million, and the 2016 fiscal year that begins October 1 is down approximately $532.1 million. The revenue shortfalls are likely to lead to cuts in services, unspecified at this point, as the governor and lawmakers prepare to enter budget discussions. Governor Snyder is set to unveil his Executive Budget recommendations in February. Staff will monitor the process and the impact this will have on budget policies of concern to the MCC.

This week, Governor Rick Snyder signed a measure into law that would restore Michigan’s Earned Income Tax Credit (EITC) to twenty percent of the federal credit in 2016. Senate Bill 847, sponsored by former Senate Minority Leader Gretchen Whitmer (D-East Lansing), would bring the EITC back up to its original level as approved in 2006, before it was reduced to six percent in 2011. MCC released the following statement after the bill was signed:

“Governor Snyder and legislative leaders deserve strong acclaim for building into the roads solution a full restoration of the state Earned Income Tax Credit. Research has proven that no policy does more to lift low-income workers out of poverty than the EITC. Michigan Catholic Conference could not be more pleased for the legislature and governor to address the economic concerns of the working poor in our state.”

The measure will only go into effect if a May statewide ballot question on road funding is approved by voters. Further updates will be provided as they are available.

As staff looks forward to a new legislative session and continued advocacy for the common good in the State of Michigan, January’s The Word from Lansing column highlights several successes from 2013–2014. Bills approved last session, among others, address human trafficking, promote student safety, expand Medicaid access to low-income Michiganders, prohibit taxpayer funding of abortion coverage, and create fair and equitable standards for legal counsel for low-income persons. A comprehensive look at the MCC’s advocacy will be online in the next couple weeks, so stay tuned.