On Tuesday, January 19, Governor Rick Snyder delivered his sixth State of the State, an annual address from the governor to outline how Michigan is doing as well as plans for continued work that needs to be done. Both chambers of the Michigan Legislature attended the speech, as well as the Michigan Supreme Court and Governor Snyder’s administration. Two major issues dominated this year’s State of the State: lead contamination in the water of a number of Flint neighborhoods and the financial future of Detroit Public Schools, which is expected to run out of funding in the spring. Governor Snyder also emphasized the need to maintain and rebuild the state’s infrastructure. 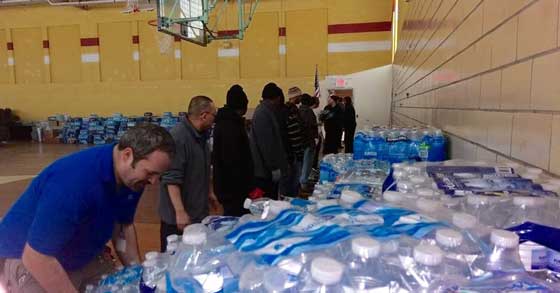 During the week, the Michigan House approved $28 million in additional aid to the current state budget (also known as a supplemental appropriation) to address the immediate needs of the city and residents of Flint. The funding in House Bill 5220, sponsored by Representative Phil Phelps (D-Flushing), will support the hiring of additional nurses for the Flint School District, the testing and replacement of school and daycare plumbing fixtures, treatment of children who have been found to have high blood lead levels, a study by an outside agency on the integrity of the city’s infrastructure, and the costs of bottled water and water filters for residents, among other aspects. The Michigan Senate has received the bill and is expected to begin consideration of the measure next week. Governor Snyder has indicated that this will not be the last budget request for Flint, as other resources for water-related and health care needs will still be required. Additionally, on Thursday, January 21, President Barack Obama announced that the federal government would send $80 million to address water infrastructure and water safety in the State of Michigan. Once it is received, the State will decide how much of the $80 million will be directed to the city of Flint. (Photo taken by Catholic Charities of Shiawassee and Genesee)

Another issue facing lawmakers this year, as mentioned in the governor’s State of the State address, is the looming debt in Detroit Public Schools. Senate Bills 710 and 711, introduced by Senator Geoff Hansen (R-Hart) this week, would create a new Detroit Community Schools District for the purpose of operating the schools. The old Detroit Public School District would have as its only responsibility the collection of taxes and payment of previous debt until the debt can be eliminated. These measures also create a newly elected city school board that would be chosen by the voters in November 2016 to take office in January 2017. During the interim period, a nine-member school board would be appointed, with four selections to be made by Detroit Mayor Mike Duggan and five by Governor Rick Snyder. No timeline for the measures or other plans to address Detroit Public Schools have been announced, but Michigan Catholic Conference will keep members updated as more information is available. 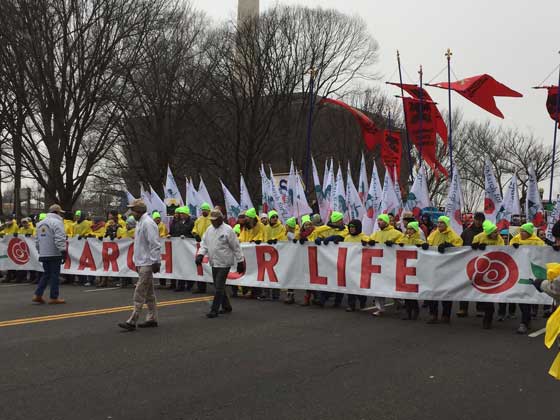 This week, many have gathered together across the country to solemnly remember the impact legalized abortion has had on our nation, our communities, and our families. Today marks the 43rd anniversary of the U.S. Supreme Court companion decisions Roe v. Wade and Doe v. Bolton, which together created a constitutional right to abortion throughout all nine months of pregnancy. Despite an impending blizzard in Washington, D.C., today many participants still gathered to stand up for the unborn and celebrate a growing culture of life at the annual March for Life [Link no longer available —Ed.]. West Coast Walk for Life activities will take place tomorrow in San Francisco. Coverage of both events is available through EWTN. 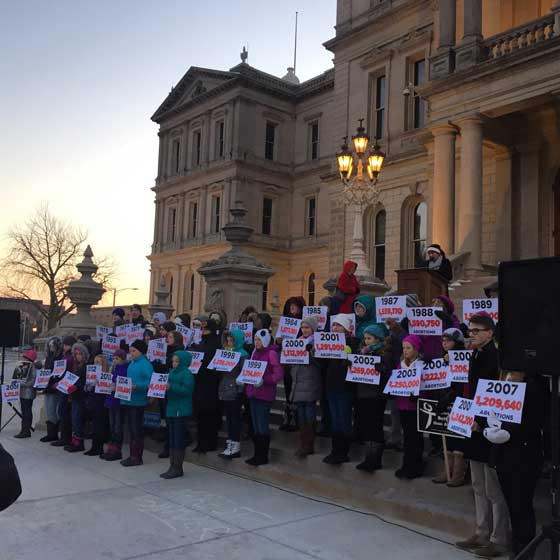 A rally at the State Capitol in Lansing on Wednesday visually presented the number of abortions performed annually in the United States since 1973. This week we remember the over 58 million children who have been aborted and offer reparation for these lives unlived. We also seek to offer healing and hope to all those hurting from abortion. Help is available by calling 888-456-4673 or online at http://hopeafterabortion.com/. Please take some time on this significant day to pray for all who have been impacted by abortion. Take action too — encourage Congress to protect the conscience rights of pro-life heath care providers who do not accept abortion.