“The news of Cardinal Szoka’s death has struck the heart of the Michigan Catholic Conference, as His Eminence played a significant role in the life of this organization since its inception in 1963. Serving the MCC while a pastor in the Diocese of Marquette, then as Bishop of Gaylord, and later as Cardinal Archbishop of Detroit, His Eminence strongly believed in the mission of the MCC to advocate for the common good for all in Michigan. Cardinal Szoka believed equally as strong in the ministry of the Bishops to provide administrative services for the common good of the Catholic Church throughout the state. His acumen in various subjects, particularly finance and business, helped to propel Michigan Catholic Conference toward the 21st Century.

“A particularly affectionate memory for this organization was when His Eminence, while serving as President of the Governatorate of Vatican City State, celebrated Holy Mass at the Tomb of St. Peter for the National Association of State Catholic Conference Directors, who were on pilgrimage to Rome in 1999. A pastor with firm direction, of deep faith and a love for the State of Michigan, especially the City of Detroit, Cardinal Szoka will be fondly remembered and mourned by this organization and the many others who were touched by his large heart and concern for all.” 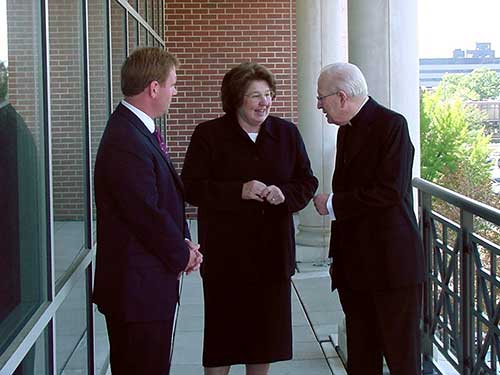 Editor’s Note: The above photo was taken in August 2003, when Cardinal Szoka visited the Michigan Catholic Conference’s new location at 510 South Capitol Avenue in Lansing. Pictured with His Eminence are Sister Monica Kostielney, RSM, former MCC President and CEO, and current MCC President and CEO Paul A. Long.

Michigan Catholic Conference is the official public policy voice of the Catholic Church in this state.