On Wednesday, May 21, the House Criminal Justice Committee took testimony and approved Senate Bills 584, 587, 592, 593, 597. These bills eliminate the criminal statute of limitations for reporting human trafficking crimes, provide counseling be given to human trafficking victims in foster care, and require medical professionals to receive training regarding human trafficking, among other provisions. The measures were introduced and supported by Democrats and Republicans, both in the Senate and in this week’s House committee. These bills now await a vote from the full House. Michigan Catholic Conference will continue to urge their adoption into law.

The Senate Families, Seniors and Human Service Committee also approved legislation this week. Senate Bills 589 provides for the termination of parental rights of a child if the parent was convicted of an offense related to child solicitation, child sexually abusive material or activity, or forced labor. Senate Bill 602 adds “engaging the services of a prostitute” as a tier II offense in the Sex Offender Registry. Michigan Catholic Conference supports the bills, which now await a vote from the full Senate.

The Word from Lansing: Juvenile Life Without Parole Sentences

May’s The Word from Lansing column, written by MCC for Catholic news outlets, provides a look into the judicial sentence of life without parole for juvenile offenders who commit serious crimes. The column, along with MCC’s recent FOCUS, provides further information about the history of the sentence and Church teaching on “restorative justice.” While legislation that passed earlier in 2014 eliminates the mandatory sentencing of juvenile offenders to life without parole, the question still remains about what to do with those who received the sentence before the law was enacted. This question will be addressed in the coming months by the Michigan Supreme Court. Michigan Catholic Conference and the U.S. Conference of Catholic Bishops will continue to support sentences that hold juvenile offenders accountable, that allow for the opportunity for rehabilitation, and that respect the human dignity of victims and offenders.

In order to move the 2014–2015 state budget forward so that it can be approved and signed by the governor, three members from each the House and Senate will debate and settle differences between the two chambers’ departmental budget proposals. These meetings are called conference committees, and this week, the conference committee representatives were named. Here is a list of the members of several budget proposals MCC is watching closely:

For more information on the specific programs within the state budget MCC is monitoring during these committees, click here.

On Memorial Day, this coming Monday, May 26, the United States will celebrate its service men and women, both living and deceased, for their contributions to our nation. Here is a prayer from the Archdiocese for the Military Services on behalf of those who have sought to protect our country and the freedoms with which we have been blessed:

Almighty God and Father, look with love upon our men and women in uniform and protect them in their time of need. Give them health and stability and allow them to return to their loved ones whole and unshaken. Be with their families and sustain them in these uncertain times. Grant strength and peace of mind to the Veterans who have given their best for the country they love. Support them in infirmity and in the fragility of old age. Teach us to remember their sacrifices and to express our gratitude. Manifest your tender care to those in the Military Academies who prepare for future service and to those who serve our Nation far from home. Teach us to remember the sacrifices of those whose efforts contribute to ensuring our way of life. Bless and multiply the priests who minister to the faithful of the Archdiocese for the Military Services. Reward their generosity and keep them faithful. Hear us as we present out prayers to You through Christ our Lord. Amen. 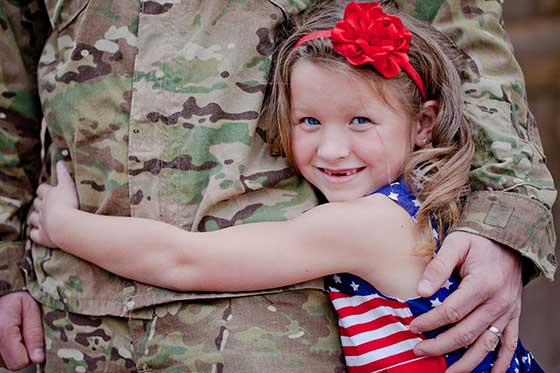