In April, the U.S. bishops held a Mass at the U.S.-Mexican border to raise awareness about the need for immigration reform and build on legislative advocacy efforts from the Social Ministry Gathering in February. On Thursday, May 29, 2014, members of the U.S. Conference of Catholic Bishops’ (USCCB) Committee on Migration came together once again to celebrate Mass and pray for immigrants, this time at St. Peter Catholic Church on Capitol Hill in Washington DC. During the Mass, there was a special focus on those families who have been separated due to deportation. Archbishop Thomas Wenski of Miami stated in his homily:

“Our immigration system is a stain on the soul of our nation. As a moral matter, it must be changed. We must pray that our elected officials recognize this and have the courage to reform it.”

After the Mass, the bishops who were present visited several members of the U.S. House of Representatives, including Speaker John Boehner, to urge the consideration and enactment of comprehensive immigration reform. For the latest updates on this topic, visit Justice for Immigrants at http://www.justiceforimmigrants.org/. 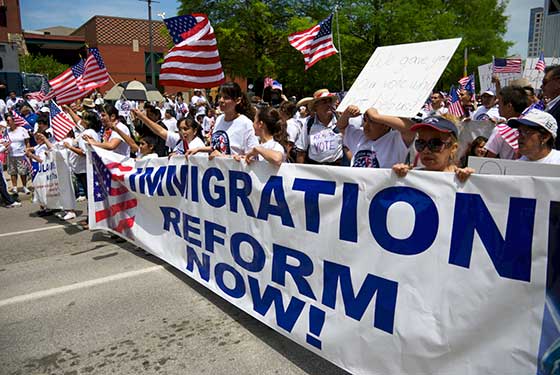