The Michigan Legislature approved final versions of the 2014–2015 budget this week, which will now be reviewed and considered by Governor Snyder. Michigan Catholic Conference, as mentioned last week, was pleased to see the inclusion of an increase for the Tuition Grant program and the opportunity for public and nonpublic schools to apply for one-time school safety grants in the final budget (see below for further budget information). The Legislature has now recessed for summer break, and will return to meet only twice in July and twice in August. Full week sessions will not return until September. Please note that Lansing Update will be published less frequently when the Legislature is in recess.

Real Alternatives, Michigan’s new Pregnancy and Parenting Support Program, obtained an increase in funding for the fiscal year beginning in October 2014 and ending in September 2015. The program was granted work project status, which means that any of the $700,000 appropriation not utilized in Fiscal Year 2013–2014 will carry over. Staff of MCC was successful with working with the Legislature to increase the appropriation amount for the upcoming fiscal year to $800,000. With the work project status, this essentially amounts to $1.5 million for the program over the next 18 months. Michigan Catholic Conference has been advocating for an increase to this program to ensure pregnant women and children across the state can benefit from its assistance. Real Alternatives provides counseling, diapers, formula, prenatal vitamins and other necessary services to mothers and their children from conception all the way through the first year. Staff is especially thankful for the support and leadership of Senator John Moolenaar (R-Midland), Representative Matt Lori (R-Constantine) and Representative Bruce Rendon (R-Lake City) for their efforts to increase this important funding for qualified crisis pregnancy centers, adoption agencies, and maternity homes.

The Department of Human Services budget passed by the Michigan Legislature includes a one-time appropriation of $250,000 to help restore and renovate the building where the Center for Hope in Flint is located. Center for Hope is operated by Catholic Charities of Shiawassee and Genesee Counties and assists the poor and vulnerable in the Flint area who are most in need. Michigan Catholic Conference is pleased to see the allocation of this one-time funding.

On Wednesday, the Sixth Circuit Court of Appeals denied Michigan Catholic Conference a permanent injunction [Link no longer available —Ed.] that would exempt Catholic Charities and other Catholic institutions from the HHS mandate. The MCC had the following comment:

“We are disappointed with the decision from the panel. At this point we are analyzing their ruling and, along with counsel, are beginning to discuss next steps.”

Further updates will be provided as they are available.

This past week, the Michigan Senate approved legislation to expand the Homestead Property Tax Credit, which helps low-income homeowners or renters lower their housing costs associated with property taxes. The bill was tied to a larger package of road funding legislation, but during the final hours of session, lawmakers were unable to pass the full package. Michigan Catholic Conference still applauds the Senate for passage of the homestead policy with bipartisan support and will follow this issue as discussion on road funding continues in the fall, which will be needed for the credit to go into effect. MCC staff had the following to say about the Homestead Credit:

“Expanding the Homestead Property Tax Credit makes for good policy whether or not it is tied to efforts to raise revenue for the roads. A moral society is one that recognizes its vulnerable citizens, and today both parties in the Senate upheld this principle by expanding the tax credit for low-income households. We appreciate the efforts of Majority Leader Richardville and Minority Leader Whitmer, along with Senator Hildenbrand for his legislation, for their actions today and now look forward to similar efforts on the House side.”

On Tuesday, June 10, the Michigan Senate passed House Bill 5232, sponsored by Representative Nancy Jenkins (R-Clayton). The legislation would remove gender specific references in the state statute regarding prostitution and would increase the penalties for pandering or accepting the earnings of a prostitute. The measure, which would help to strengthen Michigan law against those who profit from human trafficking and prostitution, is supported by Michigan Catholic Conference. The bill will now be sent to Governor Snyder for his consideration and signature.

Legislation that passed the Senate this week would assist adoptive parents who realize their child has special health care needs which were not known at the time of the adoption. Senate Bill 890, sponsored by Bruce Caswell (R-Hillsdale), passed the Senate unanimously and would provide assistance for behavioral, emotional, and mental health conditions, physical or medical impairments, and exceptional educational support needs. MCC is supportive of this measure and will urge its approval in the Michigan House of Representatives.

On Thursday, June 12, 2014, the Senate Judiciary Committee approved SB 866 and SB 867 to add protections against the abuse of elders to existing vulnerable adult laws. The legislation, sponsored by Senator Virgil Smith (D-Detroit), defines elders as individuals 65 years of age or older and lays out specific penalties for elder abuse, which includes causing physical injury, pain, or mental suffering to an elder adult. Obtaining an elder adult’s money or property through fraud, deceit, misrepresentation, coercion, or unjust enrichment will also result in significant penalties. Finally, the bills provide prosecutors the opportunity to seek enhanced sentencing for those who have prior convictions for elder abuse. Michigan Catholic Conference supports these measures, which now await consideration by the full Senate.

This week, the Michigan Legislature approved Senate Bills 667, 668 and House Bill 4997 regarding the regulation of e-cigarettes and sent them on to Governor Snyder for his signature. These measures would prohibit minors from purchasing e-cigarettes, but would not classify them as tobacco products for further regulation. At this point, it’s unclear whether Governor Snyder will sign the bills. In the past, the governor has said: "There are real questions that should be asked because as a practical matter, given the nature of the product, shouldn't it just be treated as a tobacco product and wouldn't that be the best outcome?"

Michigan Catholic Conference is one of many groups, including the American Cancer Society, the American Heart Association, and the Michigan Health and Hospital Association, which opposes these weaker protections. Instead, the Conference encourages passage of House Bill 5393, sponsored by Representative Gail Haines (R-Waterford), which includes stronger regulations and protections.

This month, Michigan Catholic Conference issued two documents for Catholic parishes and individuals that will assist with this year’s elections in Michigan, which will be held on August 5, 2014 (primary election) and on November 4, 2014 (general election). MCC’s June FOCUS, The Issues, The Candidates & Your Vote, includes information about Catholic teaching and questions that will help evaluate candidates when voting at the ballot box. MCC’s 2014 Election-Year Guidelines for Catholic Parishes and Institutions helps to ensure parishes and Catholic institutions are encouraging involvement in the political process but avoiding partisan activities. Please check out these materials and look for further election resources in the coming months on our website, www.micatholic.org 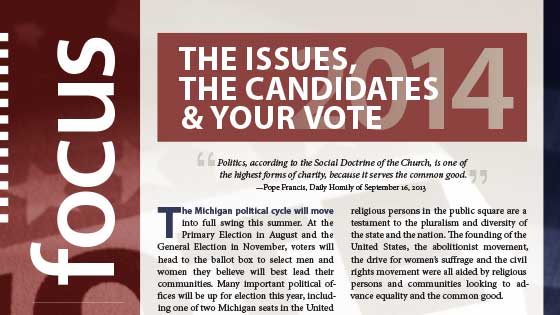